Have you ever wondered if what you were doing was really the best thing?  Like when you ordered the White Chocolate Mocha and wondered if you should have gotten the Pumpkin Spice?  Or when you walked out of the store with 5 items during a buy-one-get-one sale?  Or when you set the alarm for 5am to get up and exercise? :-)

I’ve been wondering lately if my husband and I are on the best path for our personal finances.  We have been poo-pooing the need for an emergency fund and instead have theoretically been putting all of our extra (therein lies the rub) funds towards paying down debt.  It is really hard to justify having money sitting in the bank that could be saving us interest, you know?  At least that’s what we’ve been telling ourselves. 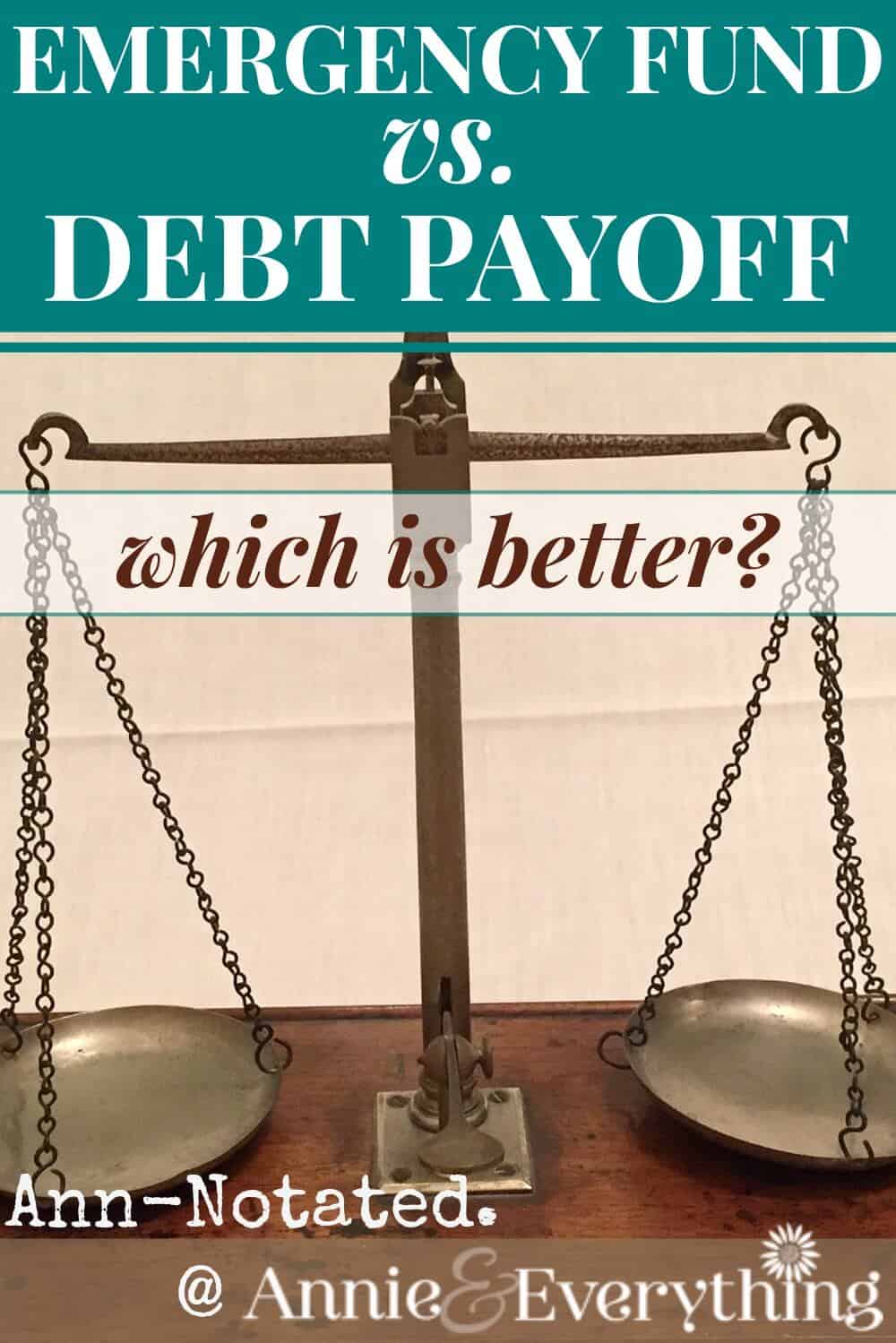 For awhile now I’ve struck a middle ground by working towards living on last month’s income.  I figure if I am paying this month’s bills with last month’s money, then I have a built-in emergency fund when I need one.  The problem with that plan is that I needed one almost immediately after I had accumulated our buffer (or at least I needed the cash to purchase a car…um…), and so here I am again trying to set that money aside.  And nothing more than the minimum is going towards debt.

So I decided to do some research and share it with y’all, since it’s been awhile since I’ve published an Ann-Notated.  Turns out there are a lot of different ways to look at this conundrum.  The decision of saving for an emergency fund vs. paying down debt is almost as debated as Coke vs. Pepsi.   So grab your favorite snack and have fun perusing the following articles!

What do the experts say about building your emergency fund vs. paying down debt?

Is Suze Right? Do Emergency Funds Now Trump Debt Repayment? — The Simple Dollar critiques Suze Orman’s advice to save an emergency fund equal to 8 month’s worth of expenses.  Wow, that’s a lot.  His takeaway? “Everyone’s personal sense of risk is different.”

Emergency Fund vs. Debt Snowball: What’s the Top Priority? — This article at Get Rich Slowly builds a case for either option.  Both must happen eventually, but the order is not a big deal.  “For us, paying off the debts faster and staying in the risky position of having no safety net worked better psychologically. Paying off debt was something we could agree on. And once the money had been sent to the credit card company, there was no bickering over what to do with it (italics mine).”  Hmmm, they’ve got a point there.

Should I Pay Down Debt or Build Up My Emergency Fund? — The people at YNAB (You Need a Budget) probably hear this question all the time.  The advice is sound: “If I were you, I’d maintain the smallest buffer required to allow me to sleep at night” — but don’t ignore the comments on this one.  They make a pretty great read!

A Small Emergency Fund is Essential to Debt Payoff Success — The title of this article at Money Manifesto makes it obvious what their position is.  The interesting part is why: because we are trying to build the habit of incurring NO MORE DEBT. If you pay down cards but then have to use them again to cover an emergency, you are not killing the behavior that started the problem in the first place.  This one is an ouch for me, y’all!

How to Build Emergency Funds for Paying Off Credit Card Debt — The Nest has a solution I hadn’t heard of before: whatever your extra funds are, use half for building savings and half for paying down debt.  Then you can be accomplishing both at the same time.

Debt Reduction, Emergency Savings: The Balanced 75/25 Method — Debt Free Adventure has another way to split it up.  Put 75% available funds towards debt, and 25% towards savings.  This is AFTER already completing a $1000 emergency fund, though.  But I like what the author said about figuring out what worked for him — he didn’t like everything going out and nothing being paid to himself.

Whether to Save and Invest When You’re Getting Out of Debt — The Finance Girl gives a list of 15 factors to help you decide which would be best for your situation.

Emergency Fund or Pay Off Debt? — Michelle at Making Sense of Cents is not comfortable without an emergency fund that is large enough to cover the possibility of several emergencies happening at once.  But she opens the question up for readers to answer, so don’t neglect the comments.

Springy Debt Instead of a Cash Cushion — Mr. Money Mustache says get yourself a Home Equity Line of Credit (HELOC), and you can draw from that when you have an emergency.  Can’t say I’ve ever heard that one before.  I guess then if you’re in debt, you’re in debt to yourself…

Do You Have an Emergency Fund? — Johnny Moneyseed (gotta love some of these blog names!) is not willing to negotiate about having an emergency fund; it’s necessary, he says.  But the total should include the amount of the deductibles for your house and car, just in case something happens to both of them at once.  I wonder if he shouldn’t be including his health insurance deductible, too…

Should You Pay Off Debt or Save for Retirement? —  Dough Roller says get the company match on your retirement before doing ANYTHING else.  We do have this in place, although we tried to get out of it and couldn’t.  The Man’s employer doesn’t match very much.  I’d be curious to do the math on this one.

10 Smart Ways to Build an Emergency Fund — Technically not on topic (because it’s not about the debate between emergency funds and debt payoff), but since Ruth at Living Well Spending Less is one of the gurus of the frugal blogging world and a personal hero, I decided I’m allowed to do what I want on my own blog.  :-)  And besides, if you’ve read all of the articles on this page and have decided building an emergency fund is the way you want to go, then this is a great place to start.

I confess I do feel better when we have money set aside.  The trick is to NOT DIP INTO IT.  Still working on that one…

Track of the Week (although I don’t have weekly Ann-Notateds anymore, I’ll keep the same name here):  Can’t Buy Me Love, by the Beatles.  It has been one of my faves for a loooooong time.  Michael Bublé has recently done a cover which is also quite nice.

Overview: Homeschool paperwork, especially grading, can easily become overwhelming. Read tips for keeping it under control and recovering when you’re behind. This has got to…