It’s been four months since I wrote my post about living on last month’s income.  I promised y’all an update after that time, because according to YNAB, four months is the average amount of time it takes one of their customers to build up a buffer with enough money to pay all of next month’s bills before the calendar page turns over. I was pretty sure I wasn’t going to be able to get completely there in four months, but in that post I vowed make it one of my priority financial goals and then let you know how I was doing. 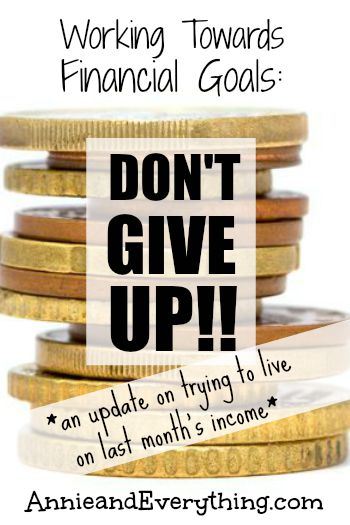 There were two decisions I made as I started the process:

1) I decided to start using the Half-Payment Method, which I read about in an article by The Budget Mama.  In the article, she suggests setting aside half the amount for every bill you have from your first paycheck each month (assuming you get paid twice monthly), and then the other half of the amount for each bill can come from the second paycheck of the month.  I was impressed by this idea.

Before, I had been paying in full the bills that were due in the first half of the month with our first paycheck; and the bills that were due in the second half of the month I was paying in full with our second paycheck.  The problem with this, as she relates  in the article and I know from experience, lol, is that there always seems to be extra money left from one paycheck that gets spent on WHATEVER, and then there is not enough from the other paycheck to cover everything. Or the amount for discretionary spending varies greatly from paycheck to paycheck, so you live in a perpetual feast or famine mode — which makes it difficult to maintain a steady budget, and is also rather anxiety-provoking, to be honest.

Just like building up your month’s buffer, though, the half-payment method is a hard thing to get started without some extra income to begin with.  You need enough to pay the usual bills in full like you have been doing AND to set aside half of the amount for the bills that will be due later.  Thankfully, in April we got our tax refunds back, so I was able to get this started with our bills.  Then in May, my husband got overtime at work — so we had a fair amount of extra money to take a stab at building our buffer.

2) The second decision I made was that payments for the credit cards do NOT need to come from last month’s income. The way I see it, if I have any extra money set aside for credit cards but not being sent to them immediately, then I am paying unnecessary interest.  (OK, granted, if I paid the balance in full in the first place then I wouldn’t be paying ANY interest…um… see my post on 5 Money Management Mistakes for my full confession about that, lol.)  It seems silly to me to keep a full credit card payment sitting around for a month when it could be posted on the card and saving me interest and paying down debt.

So to start building our buffer, I began by setting aside half-payments for all of our regular bills that were not credit cards. Then I set aside ANOTHER half-payment for as many of those same bills as I could until I ran out of available money.  I wasn’t able to fund all the bills fully in April, but in May I was able to make up the extra and have them all sufficiently funded for May AND June by the end of May.  I was definitely excited to pay June’s bills, let me tell you!

I was still not done, though, because I hadn’t started setting aside money to cover the food, gasoline and other cash categories for the following month, yet.  We were still emptying out the cash envelopes for these with nothing in reserve. I was hoping to get that accomplished in June or July.

But in June we hit a decision point.  (Cue Beethoven’s 5th, or whichever one it is that goes dunh dunh dunh DUUUUUUUUNH.) Unfortunately, life tends to happen, you know??  In this case, it became very obvious that we would need to purchase another car, because one of ours became unreliable enough to be not worth fixing any more.

I confess that we seriously looked into the idea of getting an auto loan — but we just weren’t comfortable with it.  We are having enough trouble paying down the debt we are in, without wanting to add more to it.  And we have had great success with buying old cars and paying cash for them. We haven’t had a car payment in years, and we didn’t want to get back into that hole. But cars don’t just grow on trees, and we only had a limited amount of cash on hand…

You know what’s coming, right?  Yep, we decided that my beautiful buffer would need to be sacrificed to the cause. Certainly it made more sense to pay cash for the car and start over on the last month’s income quest than to get an auto loan and pay interest and higher insurance premiums.  But I was very sad to see all my hard work get taken down to nothing again.  (Although I confess I love my new-to-me-used car! Grin!)

Since purchasing the car in mid-June, I’ve been trying to find opportunities to put money back into the budget to get started on our quest again. But July was when the first-semester payments for Classical Conversations, our homeschool curriculum, were due; and again, we felt it was better to pay cash up front while we had it than to go on a payment plan of some sort.

So here we sit at the end of July, four months after starting the mission to live on last month’s income — and we are back at square one.  Sigh.

But I refuse to give up working towards our financial goals!!

Sometimes our progress doesn’t go as fast as we’d like.  Here’s why we don’t give up:

1) Sometimes one financial goal must take precedence over another.  In our case, avoiding further debt was more important than hanging onto our monthly bill buffer.  And that’s OK!!  Progress was still made towards a goal — just not the one I was hoping for, lol.  No biggie, really.

2) Life is not static.  Guess what?  I can start the process again.  We do not have to be stuck here forever.  “We can rebuild him” — they said that about the Six Million Dollar Man, but it applies to Mr. Buffer, as well. :-) I LOVED the feeling of being ahead, of knowing that next month’s bill money was already in the bank.  That feeling is a huge motivator for getting back to that place as soon as I can.

Are you living on last month’s income?  How did you get there?  Did you suffer setbacks along the way?

Overview: When you want a personal finance curriculum for high school that isn’t the same outdated information you’ve heard before, check this one out! Note:…

Overview: When you’re wondering how to pay for college, this SAT/ACT prep course is one of the best and easiest ways to get some help.…