You cannot escape the responsibility of tomorrow by evading it today. –Abraham Lincoln

So often we put aside tasks for later — and then they pile up and overwhelm us. Sometimes it’s necessary to wait to do something; but often it’s just our laziness or lack of motivation that keeps us from doing it right away.

The problem is that task is now taking up space in our brain and causing clutter there, which then impinges on almost every other task we have to do. 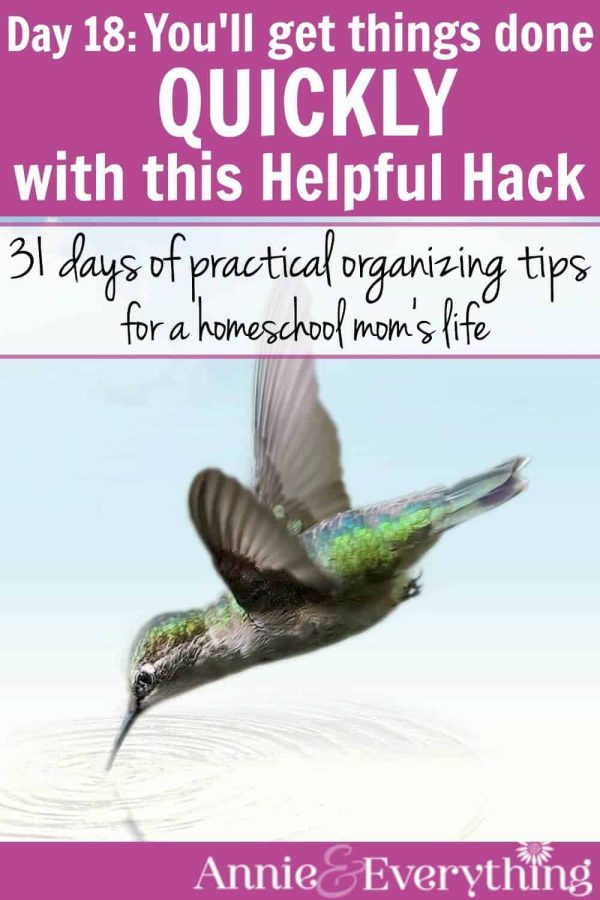 Most of the time it takes us practically two minutes to dither about whether we want to do it now, anyway, and then to set it aside. Then when we need it the information to do it, we can’t find it — which means another 5-15 minutes (at least) looking for it.

Sorting the mail — We also discussed this on Day 10. It’s super easy to throw half of it in the trash right away and put the rest in your bills to be paid pile, which is hopefully someplace easy to get to. I have mine in my home management center. Just be sure to not leave them on the counter to make a pile which grows every day until sometime two weeks from now the bills are late or the pile is gonna catch fire because it’s grown so close to the stovetop. Just sayin’.

Emptying the dishwasher — Time yourself. If it takes longer than 2 minutes, it’s not by much. Emptying it now means dirty dishes can go in there right after they are used (another less than 2 minute operation), rather than piling up in the sink.

Grading the math test — Oh, the horrible situation we are setting up for ourselves when we set the to-be-graded stuff in a pile to be dealt with later. One at a time, it’s not so bad. Weeks later when there is a huge pile and our kids got a bunch of stuff wrong that they now don’t remember even the first thing about because we took so long to give them feedback — so not fun. Don’t ask me how I know.

Making the bed — The WHOLE ROOM is much more inviting when the bed is made, even if there is still stuff all over the dresser or the floor.

Wiping down the bathroom counter — Doing this every couple of days, right after we have created our face and hair there in the morning, makes a much smaller job than saving up all that dust and hair and dried-up water for a week or more. Less than 2 minutes gives you a shiny, uncluttered counter. And if you have a stash of cleaning supplies in the cabinet right there (see Day 3), it becomes even easier!

Emptying the kitchen trash — I know I’m not the only one who tries to cram one more thing in — all day long. I know that because the rest of my family does it, too! With the result of a trashcan that is piled up and running over onto the floor. And then you can’t get the bag out without a big mess. Or you have to get a second bag. Or the son that you told to do the job is now giving you dark looks. Just do it now. Or get him to do it now, whatever. Just. do. it. NOW.

Answering email — I know it’s easy to just let the inbox grow and grow, but if you can answer one quickly the first time you see it, do so. More of them can be dealt with that way than you might think. And then you can delete that puppy altogether and be done with it.

Starting a load of laundry — Often we don’t want to do the physical labor of lugging the laundry basket to the laundry room. But if we can get past that hurdle, it really is a quick thing to get a load going.

Putting the washed load into the dryer — Yo, the washer is done NOW. Don’t put off getting those wet clothes moved. I don’t know how many times I’ve come into the room the next morning to find a wet, now smelly, load still in the washer…

Cleaning up the just-finished task — We already covered this in detail on Day 11, so I won’t belabor it again. Suffice it to say that this could usually be done in less than 2 minutes, so it makes sense to do it right away.

Hugging your child — Do it now. And later. And all throughout the day. In less than two minutes each time, you will have a happier child (though they probably won’t admit it, lol) and a more guilt-free mama.

You will probably see many other applications of this time management tip as you go throughout your day. Keep an eye out for opportunities to do the quick tasks right away, so you can wipe your brain slate clean and move on.

Procrastination of the small jobs we encounter throughout the day often creates much larger jobs to be done later. Often, that small thing you procrastinated about can blow up in your face unexpectedly, creating a mini-emergency that can really mess with your stress level. (Can you say “left the kid’s uniform in the washer and he needs to leave for work in 15 minutes?” So yea.)

Using the two-minute rule keeps the procrastination level down, your brain less cluttered — and you more in control of your daily life. Try it and see!

Overview: Getting a homeschool high school diploma is a simple process that anyone can accomplish easily. Find out exactly what a diploma is and how…

Overview: Taking the time to develop your homeschool mission statement for high school is one of the most important ways to ensure success and avoid…