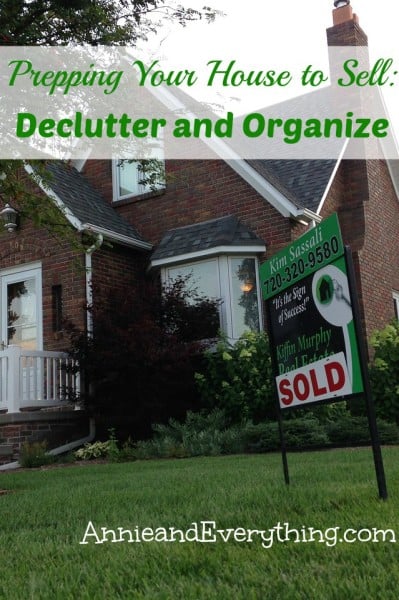 Last week we started a series on getting your house ready to sell — because that is what I am working on right now, and I feel like I need the support of y’all to keep motivated!  Part one was all about making a plan… check; I’ve got that part done.  This week I’m beginning to declutter.

Decluttering is a bit of a buzzword these days. Everyone seems to be talking about simplifying, paring down, or living the minimalist lifestyle.  It is often easier said than done, though, isn’t it?  We need our stuff!!  But there is no doubt that your house will show better if the drawers, cabinets, and closets are not full to overflowing; people want to know that there will be enough room for their own stuff if they choose to buy your house, lol!  So it is wise to declutter and organize while you are prepping it for sale.

How to Declutter the “Annie and Everything” Way

The old standby/tried-and-true method of decluttering is to make three piles. The idea is to work quickly to sort items into boxes with the following system: stuff to keep in one box, stuff to give away in another box, and stuff to throw away in the third one. Some people use a fourth box for things they’re not sure of yet (more on that below), or a fourth box could be used for things that need to be relocated to another room. Then one places the items from the “keep” box back where they belong.

I confess I’m not a huge fan of the boxes.  First, I’d rather use trash bags for things to give away and throw away (it saves a step to put trash straight into the trash bag, hello).  Also, rather than removing everything from where I am working, I leave the things I want to keep right where they are (or maybe set them on the counter temporarily so I can wipe out the drawer/cabinet I’m working on), organizing as I go. Why take them out and put them in a box, only to put them back again? This I ask myself. But if the boxes work for you, then go for it. Whatever works – because when you find what works for you, that is half the battle.

The tricky part is deciding which things go in which pile, lol.  The point is to make the “give away” and “throw away” piles LARGE, while the amount of stuff you actually keep decreases to much less than what you had before. It helps to think about how long ago you used the item last. If it was less than a year ago, and you can think of an occasion where you would use it again, it’s most likely something you want to keep. But if you are not using something more often than once (or less) per year, then chances are you won’t miss it if you get rid of it.

However you sort them, make sure to get rid of the “give away” and “throw away” piles QUICKLY.  I cannot emphasize this enough. GET THEM OUT OF THE HOUSE NOW. Do not hesitate, do not procrastinate, do not pass go, do not collect $200 – make that trip to the thrift store within the next day or so. Take it from someone who knows; those piles have a habit of spreading all over the house if you leave them sitting for any length of time… or your four-year-old sees that toy she hasn’t played with in forever and you find yourself in a tug-of-war to get it back… trust me, it’s not pretty.  Avoid the whole thing by removing those items from the house STAT.

“But,” you say, “I want to have a garage sale!  I need to keep the ‘give away’ pile so I can sell those things and make lotsa moola!!”  Can I just say something here?  I warn you, it’s gonna be rather controversial…  Here it is:  NO GARAGE SALE.  The purpose of this whole exercise is to get the house ready to sell.  To clean out the clutter fast.  Keeping stuff lying around does not accomplish that.  And I personally have never made “lotsa moola” from a garage sale.  But that may be just me…

There might be some things that you are not sure you want to get rid of yet, even though you may not have used them in awhile. For these things — there should be as few of them as possible!! — I do like to find an actual box. After putting the “I can’t make up my mind” pile into the box, it can be put in storage (basement, attic, or closet) for awhile, to see if you miss what’s in it. If you need something from there later, you know where it is. A few months down the line you can revisit the box and make final decisions about the items in there.  Whatever you never missed or forgot it even existed can get discarded.

If you have a LOT of stuff to declutter, or are in a hurry to make most of the house look good, it can be helpful to just specify a room to which you take everything you know you won’t keep. Go through the whole house fairly quickly and make a huge pile in that room. Then at your leisure you can sort through it and decide what to give away, what to throw away…and what you’ve had second thoughts about and want to put back into circulation, lol.  And incidentally, this would be the way to go ahead and have that garage sale; just keep all the garage sale stuff in this one room until the big day.  But don’t blame me when you have to get up early enough to beat the crazies who show up at 5am! :-)

Another fairly radical option is to rent storage at the place down the street for a few months. Then you don’t have to be completely finished with the declutter job before you put your house on the market; you can take all your extraneous stuff there pretty quickly and get it out of your hair. Again, you can sort and reorganize when it is convenient – maybe even when you have to be away from the house for a showing.

What areas should you concentrate on when you don’t have much time? The kitchen and bathrooms, for sure. These are the rooms that have the drawers and cabinets that are part of the house you are selling. People looking at your home to purchase will probably not look into your dresser drawers; but they most likely will look into kitchen and bathroom cabinets and drawers, to see how they are made and how much storage there is. Especially if you have specialty-type cabinets, like a pull-out pantry or an appliance garage – those are always fun to play with (guilty as charged, I’m afraid). When you’re done in the kitchen and bathrooms, then hit all the closets, then any laundry room cabinets/shelves, and so on.  (UPDATE:  As I’m working through my own house, I see that I have to revise this and say that closets are right up there in importance, as well.  And they might actually get done easier than ALL those kitchen cabinets, so the closets might be a good place to start, instead.  Or work on them both alternately…)

While you are decluttering, think ahead to the staging of your home (which will be the subject of a post all by itself, at the end of this series). One of the main tenets of staging is that surfaces should be left as clear as possible. That means that in your bathroom, for example, you don’t want to leave all your bottles of lotion, hair goop, and contact solution on the counter. Find room for them in the drawers or cabinet, or find a pretty basket to put them in if they must be in sight. The same goes for magazines in the living room, appliances/spices/utensils on the kitchen counter, etc. Make room behind closed doors/drawers for most of the stuff that is in view now.  This will help the house look more spacious and inviting.

Work Consistently to Declutter Your House

Many organizing gurus recommend to declutter for 15 minutes every day, just as a matter of lifestyle. It’s awful how something you decluttered/organized just a few months ago can get messed up and unlivable so quickly, but that’s how it happens in my house. Especially the kitchen drawers and cabinets – why is that?? Regularly sorting through stuff is a good idea, and just about anybody can find 15 minutes a day to do it in. It’s the perfect time to get one drawer or cabinet done, which means you could get an average kitchen done in a week or two. Perhaps to get a house ready to sell, you could set aside several 15-minute segments per day.

My own plan is to concentrate on one room per day (or two days, depending on the room) for the next couple of weeks, at the same time as I’m working on other fix-it projects that need to be done. I’m hoping the decluttering won’t take too long, because I have never been much of a “keeper” anyway. My mother, who grew up during the depression, has been appalled sometimes at what I have gotten rid of. She has always been one to save items for some imagined future use… or pass them onto me. The time she sent me a three-dimensional cake pan in the shape of a recumbent lamb will go down in history… I really could not see myself using it for any purpose in the world, much less making a cake with it; and my husband had started a burn pile the same day I was sorting through some stuff… um.  So of course she was walking around outside one day and saw the half-baked lamb sticking out of the ash pile… It was not easy to explain that one away, let me tell you! :-)

Anybody else working on getting their house ready for sale right now?  Let me know in the comments!  To be sure to see the remaining posts in this series — next week we talk about cleaning! — put your email in the box in the sidebar. Thanks for stopping by! :-)

Further Resources As You Declutter

15 Rules to Help You Declutter at Early Bird Mom 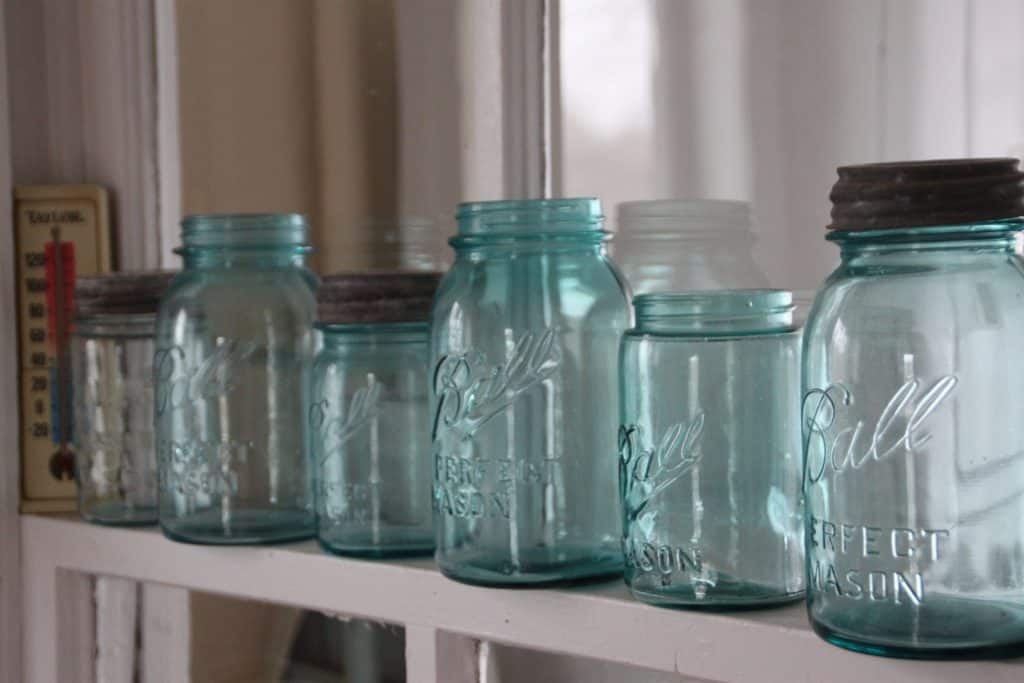 I love pretty magazine pictures with beautifully organized shelves, don’t you? The kind where everything is stored in identical black baskets with little calligraphized labels. No… 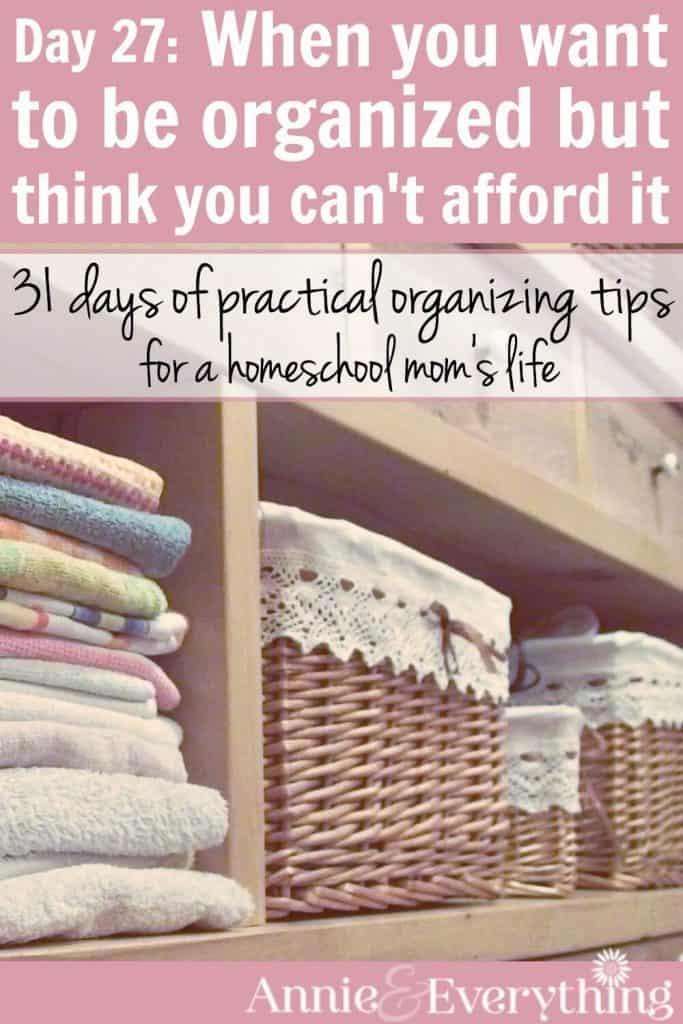 You woke up this morning with the organizing bug. Something has GOT to be done about the dining room, where you’ve stashed everything you didn’t… 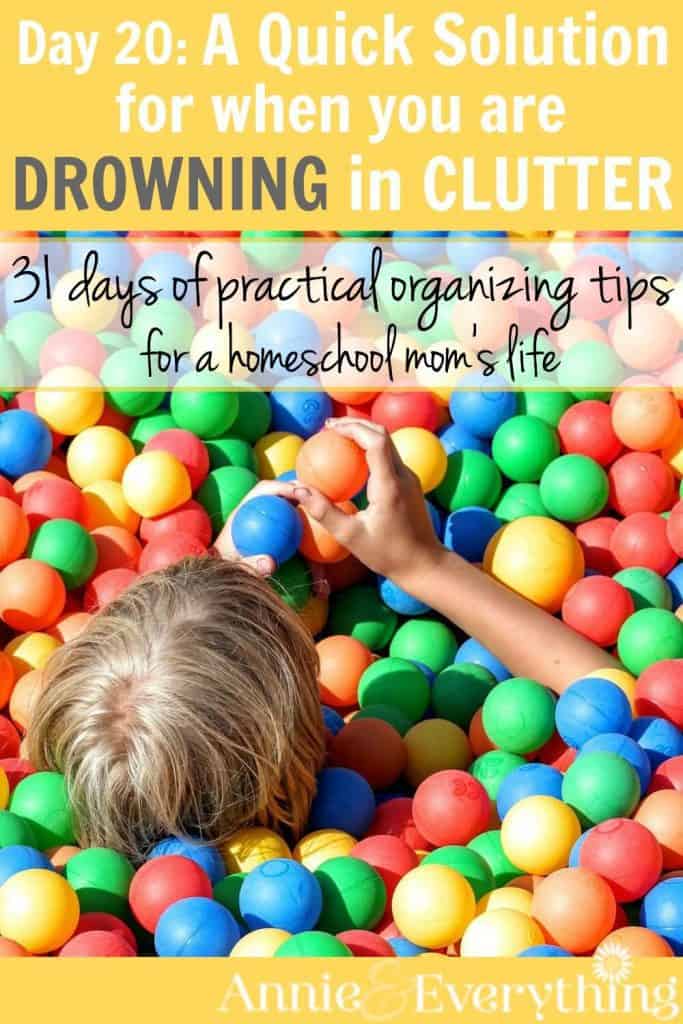 Pop Quiz: Name two places in your home that are always cluttered. I bet you passed! It wasn’t that hard, was it?? LOL. If you’re…

16 thoughts on “Prepping Your House to Sell: Declutter and Organize”