I have to tell you, this no-spend-month thing is pretty amazing.  We are so NOT doing so many things that we have been characterized by doing in other months.  The biggest is probably the frequent trips to W-Mart.  You know the kind I mean: you go in for one item and come out with ten.  And most of those are snacks you just had to have for tonight.  Oh yea, and the movie that was in the $5 bin. 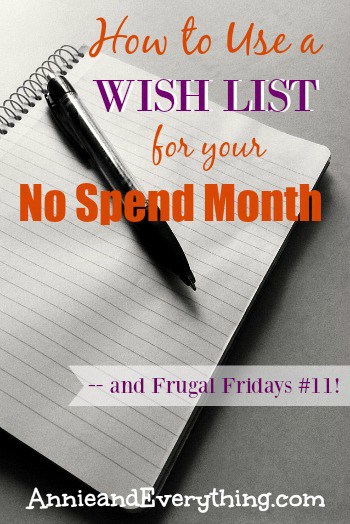 This month The Man and I agreed to try doing a no spend month for the first time.  If you haven’t been following my weekly updates, you can find them here:

Today, as we are almost exactly half-way through the month, I can say that I actually feel like it’s gonna work this time.  Other times that we’ve tried to limit our spending have not gone so well.  One or the other of us has always bailed.  This time I think we are being more successful because of three things:

The first is the accountability from doing our no spend month in public, on the blog.  I REALLY don’t want to have to tell you guys that we blew it big time!

The second is that we had a real plan this time and didn’t just say “yea, let’s try not to buy things we don’t need this month.”

I have not seen the idea of a “wish list” on anyone else’s articles about doing a no spend month.  Maybe it’s out there, but I think it just might be exclusive to Annie and Everything.  And you know what?  I think it is one of the key things needed to make a no spend month successful.  If you are wanting to do a no spend month for yourself, don’t neglect this simple process!

The wish list is something I developed at the beginning of the month, and you can grab your own copy of it in the first post about no spend month.  (You can just use a blank sheet of paper if you like, but I always feel like things are more “official” if I have a printable for them.)  The list is helping us to avoid impulse spending and forking over mula for things that we don’t really NEED for the duration of the month.

The top of the list says “January is a No Spend Month.” (In case we’ve forgotten.)  Underneath that there is a line that says “Things We Will Wait to Purchase.”  The concept is simple:  Every time we think of something we would like to buy, no matter how big or how small, we put it on the list.  Doesn’t sound like much, does it?  But it helps in many ways:

1) I’ve written down what I want, so I won’t forget it.  Which is kinda funny, really, because if I really want it you’d think I wouldn’t forget it.  So if I do forget it it can’t be all that important, right?  But I like the comfort of writing it down. I feel better about waiting for it when I know there is a record of it.  It’s a weird Ann psychological thing.

2) I know that I can revisit my idea next month.  At this point we’ve only committed to the month of January, so all these things are possible purchases in February.  Phew, that makes me feel better!

3) We are all contributing to the list.  (Although I’m usually the one who does the writing.) That means no one feels like they’re the only one sacrificing for the cause.

4) A day or two after writing something down, I often realize how silly it was.  But at the time I wrote it down, it was IMPORTANT to me.  Enough so that in the past I would have run right out to get it.  Now I see how durable those wants really are — which is not much.  And in the future maybe I’ll realize that before buying.

5) We’re learning that doing without is not as horrible as we used to think it was. #firstworldprobs

6) The kids are learning not to ask for stuff so much.  And when they do, it’s an easy answer: “Write it on the list!”  Which makes being a mom just that much less stressful.  We all know the emotional angst of having to say no or trying to juggle all the various requests the kids make for things they think are absolutely necessary for happiness.

7) NO GUILT.  This is huge, y’all.  The money is staying where it’s supposed to.  The budget columns aren’t showing negative numbers.  I’m not having to play “steal from Peter to pay Paul” as I move money between budget categories to cover overspending.  All because instead of buying it we are writing it down.  It’s a GREAT feeling.

We have posted our list on the front of the fridge where it is easily accessible, with a pen nearby.  I don’t want to have to be hunting for a pen — that would keep me from using the list like I should.  I’m owning my laziness, y’all — but in your heart of hearts you know this would be true for you, too! :-)

Having a no spend month is proving to be an educational and literally profitable (lol) experience for our family.  I encourage you to give it a go sometime soon.  And pin this series so you can come back to it when you do! :-) 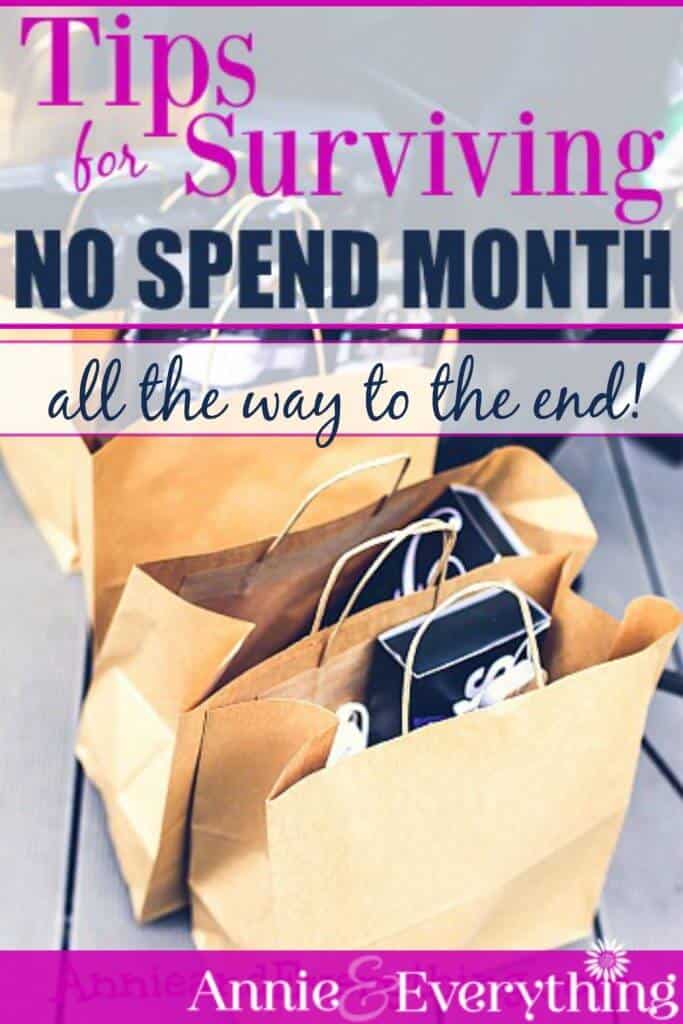 Usually the saying is that it’s the first thing of whatever you’re attempting to do that is the hardest.  The first step is the hardest,…