Overview: Choosing to study Latin through high school can make good sense for several reasons. Seven of them, in fact!

What does that say, you ask?? Muahaha, I’ll tell you AFTER I tell you why Latin is a worthwhile language for your kid to study ALL THE WAY THROUGH HIGH SCHOOL.

Lotsa Classical Education peeps drop the Latin when their kid gets to middle or high school, thinking it will be more practical to switch to Spanish or French or some other “non-dead” language. Well, I’m here to tell you that Latin is alive and well and will benefit your child more than you think! 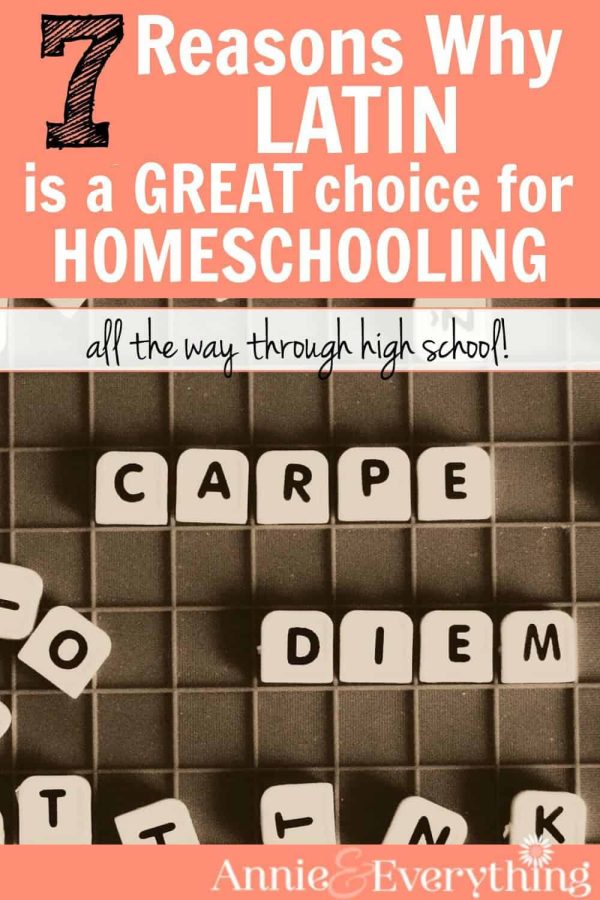 Here’s why continuing to study Latin through high school is beneficial:

1) Studying Latin through high school improves one’s understanding of English. Yes, studying other languages will do this, too, to an extent — but Latin moreso.

Obviously, our English vocabulary can be traced back to Latin roots SO MUCH of the time. My hypothesis is that kids who know Latin probably do better on the SAT/ACT for this fact alone.

As for grammar, Latin is an inflected language, which means that it relies more on word endings than word order. Since this is vastly different than English, the student has to really think about what they’re doing. This enhances their understanding of English grammar as they work to apply it in a non-intuitive situation. Again, this can only help with the ol’ SAT/ACT prep.

2) As a student parses a Latin sentence (i.e., translates it by figuring out what the endings mean and where each word would go in the English word order), they are being trained in logical thinking. “This word has this ending, which means it can’t be the subject (even though it might be the first word in the sentence) — it must be the direct object. But it also has a plural ending — and so does this adjective. Do they go together?” You can’t succeed with more complicated Latin sentences without exercising the logic side of your brain. And teaching teens logical thinking is always a good idea, lol.

3) Latin is a perfect language to use in a homeschool environment, because you don’t have to try to provide a conversational component. Trust me, I’ve looked everywhere for a way to get my child speaking a foreign language for their studies, and short of hiring an expensive tutor, it ain’t out there.

Rosetta Stone is NOT sufficient to provide this for other languages — it helps with listening, but speaking (in spite of whatever voice-recognition software is out there) is an exercise in frustration, as the kid gets dinged for saying it wrong but can’t figure out why.

So to be brutally honest, your kid will NOT learn to speak that supposedly “better than Latin” language conversationally in the homeschool environment — they just won’t. So don’t let that be an excuse to turn you off of Latin.

Meanwhile, though, there is a Rosetta Stone for LATIN (yea, baby) that I have reviewed here: Homeschool Latin Practice for the Classical Conversations Challenge Years. It will SUPPLEMENT your Latin studies very well, giving your child practice that isn’t as boring as the ol’ textbook, without the expectation that they will become fluent in listening/speaking the language. So much less stress, y’all.

4) Studying Latin through high school means you have access to a unit study without even trying. As your child studies Latin, they simultaneously learn a lot about the history and culture of Western Civilization. Latin texts are rife with allusions to ancient Greece and Rome — their leaders, their advancements, how people lived, their battles (which was a big part of their existence, since they were so busy conquering everyone and building those roads, don’t ya know).

You can expand on this and really give your kids an in-depth look at the civilizations that are the foundation of European and American government and culture. It’s easy to add read-alouds that take place in ancient times, do map work, discuss the differences between ancient and modern-day governments, lifestyles, food (or whatever interests your family), throw in some Pythagorus, and grab some Shakespeare (Julius Caesar) or Homer to incorporate literature. Bing! A fascinating unit study all there for you.

5) If not a unit study, at the very least studying Latin will broaden their understanding of the various subjects they study over the course of their high school education — the aforementioned government and literature, for example. And don’t forget art. There are SO MANY REFERENCES to ancient civilization and the stories that originate from there, that students get exposure to while studying Latin, that they will then have “aha” moments about as they study other supposedly non-related topics.

6) Latin has curriculum resources  — thinking specifically of Henle, here, although there may be others, too (and this is an affiliate link) — that allow the student to progress to an ADVANCED level. You don’t find that for every other language out there — at least not if you want to use it in a homeschool environment. And without spending an arm and a leg, hello (again because of the speaking/listening thing. That costs money, y’all.) Your student can study Latin for 4-5 years, legitimately advancing through higher levels (not just spending multiple years on levels 1 & 2) and receive that many credits on their transcript for ONE language.

(This prolonged, in-depth study looks great to colleges, I might add.)

With this level of accomplishment, they can translate the classic literature from its original language — talk about primary source material!! This is something that is part of the Classical Conversations curriculum for senior year, translating Virgil’s Aeneid as part of an Ancient Literature course. So it totally can be done, y’all, lest you think I’m just day-dreaming. :-)

7) Latin is the language of medicine, law, science, and liturgy. Any kid who wants to delve into any aspect of these subjects can only benefit from studying Latin. Plus it’s handy just for living life — like going to the doctor, reading an employer’s contract, etc.

This week, in my Classical Conversations Challenge 4 class, we will be translating Martin Luther’s 95 Theses, which he nailed on the door of Whittenburg Church on October 31, 1517 — thereby initiating the Protestant Reformation, 500 years ago TODAY. Might just be why I’m publishing this post on this day, y’all!! :-)

So many of our goals these days seem to be based on what is “practical.”

Sometimes though, we can miss the most practical thing because we don’t fully understand it. Not only is the study of Latin enriching in many ways, but studying Latin through high school could end up being the best thing for your kid.

Oh, and that quote at the beginning? It means “to the stars through difficulties.” Most things worth achieving in life require a fair amount of effort and/or difficulty. But don’t let the difficulty keep you from reaching for them. HUGS!!

Overview: Classical Conversations Challenge A can be scary and overwhelming. These tips will make it much more doable! Let me guess. You’ve been in Challenge…

Overview: Homeschool Latin instruction moves fast during the Challenge years. Some supplemental practice can sure help! Note: This post was sponsored by Rosetta Stone. I…

Overview: Your child can learn helpful memorization techniques as they memorize the periodic table! Note: I was given free access to the course Memorize the…