There is a dream on the horizon that many homeschoolers share.  It’s like a mirage, and once you think you’ve gotten there, it’s gone.  It stays ahead of you like the carrot on a string, always ahead, never possessed.  What dream is that, you ask?  It is the myth of the perfect homeschool schedule.  Guess what, y’all — it doesn’t exist.  We may think we have one for awhile, but then circumstances change, and we have to adapt.  The good news is that we can.

I learned early on in this parenting gig that a schedule is a good thing to aim for.  I remember distinctly when my oldest was 17 months old and started to walk.  (Yes, she really was that old.  I confess I didn’t exactly encourage it earlier than that… why make more work for myself?)  All at once my life went from fairly sedentary to very mobile.  I was no longer proactive but reactive, as I followed my little darling around while she “explored” everything.  I rapidly decided this was not working for me and called an older lady friend, who gave me some great advice: make a schedule for your toddler.

What a difference that made.  #1’s day was planned, from meals to naps to activities — playpen time at 10am, book time at 4pm, etc. — and the resulting peace, and the feeling of being somewhat in control of life again, made me a believer in schedules.  So it should be no surprise that when we started homeschooling, making and following a schedule was a priority. 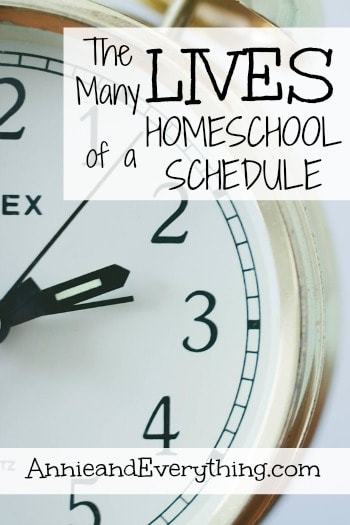 By then I had been introduced to the book Managers of Their Homes, written by Teri Maxwell.  Teri is the mother of a large family, and she developed a system for scheduling every member of the family, with activities changing for everyone every 30 minutes.  The book comes with a kit including slips of different-colored paper; you write an activity on a piece of paper, color-coded to each individual, and move it around on a grid until you are able to design the best routine for everyone.  You can plan for mom to work on math with Johnny at 10am and then with Suzy at 10:30am, while big sister does spelling and baby takes a nap.  The book is a wealth of information and good ideas.

I still have my schedule from 2002, when I had kids in second grade and kindergarten, and a 4- and 2-year-old, and was pregnant with #5.  (That must’ve been the first year I made a spreadsheet on the computer.)

There was some variation within each time unit, but mostly it was pretty tightly configured.  The afternoon was similarly scheduled, and there was little to no “free” time overall.

I forget how many times it actually happened the way it was planned out on paper.  I’m guessing not many.  There’s no way to predict teething and fevers and doctor visits and temper tantrums and phone calls from long-winded relatives.  But it gave me something to aim for.  I’m just glad I was young and energetic when I had to keep the circus going at this mad pace!

At the time, it was what I needed to do to keep my sanity and the young children from constantly coming into conflict with one another and the house relatively picked up.  I’m guessing if I had it all to do over again I’d still do something similar.  I don’t do chaotic well, even today.

Each year before the school year started, I would make a new schedule similar to the one above.  We would use it for awhile, but eventually it would always need to be tweaked.  Something didn’t flow right, or #3 and #4 needed more time apart, or the toddler wouldn’t sleep while the eldest practiced her violin…

I TRIED living without a schedule sometimes, I really did — I think it was in the name of feeling like I deserved a break.  And what invariably happened is we all got cranky.  When the kids got to decide what they wanted to do all day, they would actually complain more.  They’d get into more arguments, they wouldn’t take good naps, the chores would not get done — and I would be stressed.  The “break” was actually more irksome than the schedule.

So for many years, we did not stop school for the summer; we just kept the schedule going all year round.  Everyone was happier with the routine than without it.

As the kids got older, though, the schedule got looser.  By the time the oldest was in middle school, it was no longer necessary to plan her day in such detail.  I’ve shared in an earlier post about our homeschool journey that we encouraged independent learning from an early age.  This meant that the late-elementary and middle school children did not need as much supervision and were allowed a little more freedom in determining how to use their time.  The overall plan was still determined by me — as in which subjects were done when — but there was more free time, and time slots were not so tightly packed.  By the time they were in high school, then, they were fully determining their own schedule for each day.

(As a side note, during these years I found it an effective disciplinary tool to tighten a child’s schedule back up again.  A child who began acting disrespectfully, or was argumentative with siblings, or unproductive in schoolwork, or irresponsible with chores, no longer enjoyed as much self-determination as before.  He/she would be told what to do and when to do it and supervised much more closely for awhile.  When correct behavior returned and was sustained, the schedule could be loosened back up again.)

Now two of my children are off at college, and I have two high-schoolers and a 6th-grader (who thinks she is a high-schooler, lol).  We basically have no schedule at all now.  Even for the sixth grader (one of the benefits of being the youngest), the only plan we have is the list of lessons to accomplish each day.

I will confess that this is good and bad.  Of course I love the freedom in my own life, but it’s not always good for me.  Or for the kids.  Guess what — when you’re given the entire day to get something done, you procrastinate, and often don’t get it done at all, because there are so many more interesting distractions to keep you occupied.  This is true of them AND me.  Now the struggle to stay on our homeschool schedule is not how to keep to the blocks of time within each day, but to complete the tasks assigned.  And sometimes I think it might be good to go back to a more rigid homeschool schedule — and then I roll over in bed and sleep for a little longer….

So what is my point in all of this?  Whether you prefer to schedule tightly or loosely, each season will require some kind of adaptation.  What worked one year (or month) (or week) may not work the next.  It’s not about this schedule or that schedule being right or wrong; it’s about what works for you and your family.  For now.  Because in a week or two it may be different.

But that is one of the beauties of homeschooling — when needs change, we can adapt to meet them better.  Our homeschool schedule can be whatever we want it to be.  Just don’t expect it to be perfect.  :-)

Overview: Guest contributor Lynna Sutherland is a veteran large-family mom who is amazing at keeping things organized and stress-free. Here she shares step-by-step instructions for…

2 thoughts on “The Many Lives of a Homeschool Schedule”