This is the third part in a series of our homeschool reviews on our curriculum choices for this year. Part 1 is for our high school senior, and part two reviews the high school sophomore curriculum, and today we’re looking at our lone elementary student, the sixth-grader. 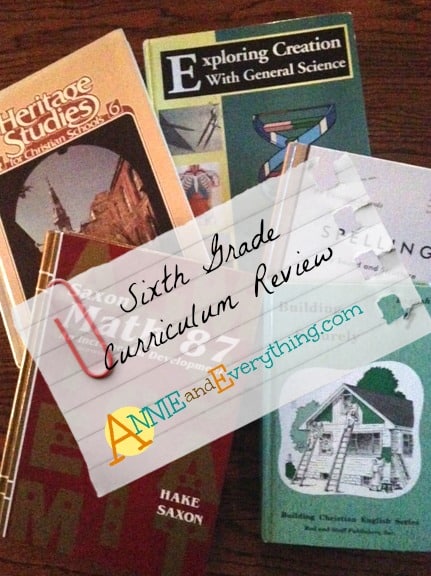 Child #5 does keep me hopping! She is one precocious little person, and so what has worked for the others is often just not right for her. She gets bored easily and doesn’t hesitate to let me know it! But here is what we’re going with for this year: 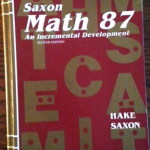 (Next year we’ll do Algebra ½, which will reinforce all the basic math principles from the earlier grades; then in 8th grade it will be time for Algebra from another publisher.)

In the early elementary years I don’t have a whole lot of patience for all the manipulative-based courses that are out there (Saxon is one of them, actually). I think manipulatives have their place, don’t get me wrong, but I don’t want to spend all day/every day with them. So I have used Abeka for math through second grade (finding though, that the first grade book is very doable in kindergarten, so by the end of second they’ve finished the third grade book and are ready for something more substantial).

I love switching to Saxon 5/4 at that point, mainly because Saxon was the pioneer of the built-in review–and when my oldest was in third grade, that was a new thing! LOL. But in my brief stint as a public school math teacher (fresh out of college), that was always one of my pet peeves: we’d get through the chapter on fractions and then move on to decimals and never see fractions again. I can even remember as a student, WAY back when, how hard it was to remember how to do the fractions when I hadn’t seen them in so long. So to me, the constant review in the Saxon books is an excellent thing.

Also, we have the old hardbound textbooks, which I confess I prefer to what they’ve got lately. I think it is important for kids to learn how to use notebook paper for their math work, i.e. how to rewrite a math problem onto the lines so that the numbers line up correctly and are not reversed or copied wrong. Workbooks just do not give them that opportunity. (You can find used hardbound copies of Saxon 8/7 on Alibris and Ebay.)

I know there are critics of Saxon, but for the middle years I have found it to be great. 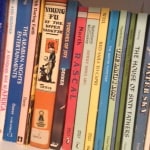 Sonlight Core F, Eastern Hemisphere – except that the version I have is SO OLD (it’s from 1994 people, I kid you not) that it wasn’t called that then.  An older lady friend of mine still had it from when her now-grown-with-kids-of-their-own daughters were in fifth grade, and she offered to lend it to me FREE.  Free is good, y’all.

And who cares how old it is; Sonlight’s premise of learning history via good historical fiction is still evident.  Their books are always well-chosen; I confess I’ve never understood why they feel the need to change things in their packages from year-to-year.

We did use Sonlight one year when the others were little, but the cost was prohibitive for us purchasing it in succeeding years.  And I’ve never found anything less expensive that I liked as well.  That’s why when she offered, we grabbed!  The only drawback is that the teacher’s lesson planning is very laborious compared to the newer versions. But my friend kept all the books in fantastic condition (and I hope we can do the same, gulp) and all I had to do was go find an old edition of Bob Jones Heritage Studies 6 to go along with it. Fun stuff! 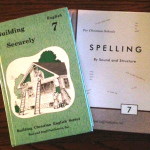 For Language Arts we are doing Rod and Staff English 7 and Spelling 7. I think their grammar and spelling instruction is top notch (see a fuller review of Rod & Staff here). I didn’t discover it until the older children were past the elementary years, but #5 started it in 2nd grade and has done it every year since. This is a case of “if it ain’t broke, don’t fix it.” And we’re supplementing with the Readers and Read-Alouds from the Sonlight course mentioned above. 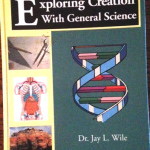 Apologia General Science – This was the first Apologia book that we ever used, back when the eldest was in 7th grade. We fell in love with the conversational style and the Christian approach.

Another thing I love about this book is that it has taught the kids how to study for tests that are not mutiple choice, that are for a subject other than math or English. (I don’t tend to test too much for science and history in the elementary years; I just let them read about it and enjoy it for awhile. But at this point it’s time to learn these things…) The book itself doesn’t do that in so many words, but by virtue of having to take the tests and getting feedback in the form of a grade, the student begins to understand that studying means more than just reading things over; it means effort and memorization.

I think this is a great age to learn this, because they are up to the challenge and won’t be so easily discouraged as they might have been when younger. But if they get a poor grade from not studying well, it won’t hurt them in the long run, because grades for this year do not yet go on the high school transcript.

And for Miss Precocious #5, I think it’s time she didn’t have life so easy! She wants to be a nurse practitioner or PA, after all, so now is as good a time as any to get the serious science study underway. If she doesn’t succeed with it this year, she can try again next year.

But one thing we’ve done this year to help in this endeavor is purchase the lapbook journal for the first time.   This has been an amazing resource, and I’ll be purchasing one for future Apologia courses as she takes them.

This year we’re also supplementing with the Sonlight science materials. Again, she needs things to keep her busy and involved. So far this is fitting the bill.

Often by this time of the year we have discovered that one or more of our curriculum choices is not working out the way we thought it would. So far this year, that hasn’t happened, so I’m glad for that! What choices did you make this year, and are they working out? Let me know in the comments!

**Disclaimer: these are all my own opinions and have not been solicited or recompensed in any way.

I asked a question in my It’s Not that Hard to Homeschool K-8 Facebook group recently: “Do you feel like a success as a homeschool mom?…

Overview: This article tells how to teach independent learning to your kids of almost any age and gives ideas and strategies for this very important…

Overview: You don’t want your kid to hate math for the rest of their life. Here’s what to do about it. It may be a…