Math manipulatives are a BIG DEAL these days. Many math curriculums are built entirely around the idea that in order to learn mathematics best, a child must have within reach a set of objects specifically created for him to hold and handle in order to explore and understand mathematical relationships.

Well, I’m here to say I don’t think they’re really necessary. I don’t think that the amount of money that is charged for them is worth the value that they provide. I think most children can learn math just fine the old-fashioned way — by memorizing facts and procedures.

I do think manipulatives are fun; don’t get me wrong. It is fun to make a square of blocks that show a multiplication fact, or to put tangrams together like a puzzle, or to play with pie pieces that represent fractions.  I get that.  But I don’t think they really do the job they claim to do. 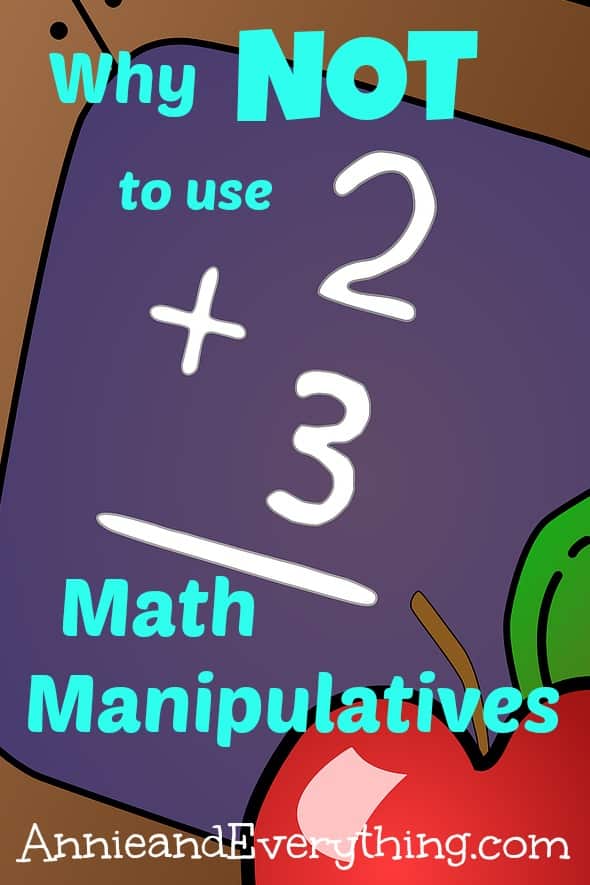 The idea behind math manipulatives is that your child will learn to understand the WHY behind mathematical concepts if he can SEE them happening in front of him. Why does 2 x 3 make 6? Because if I set up three rows of 2 cubes each, there are a total of 6 blocks.  How many 1/4’s are in ½? Just stack these pie pieces on top of one another and you can see!  How fun!  In one manufacturer’s own words, they “help make abstract ideas concrete” and they “make learning math interesting and enjoyable.”¹ This all sounds well and good.  But I don’t think it works that way.

First of all, in the early elementary years, the child is not capable of understanding abstract concepts, which is basically what math is made of.  The brain does not develop the ability to think in the abstract until about middle school age.  So in the younger years, trying to get the child to understand the WHY behind a mathematical concept is a futile task.  Manipulatives will not magically make that happen.

Secondly, while math may be more fun with manipulatives, hopefully our goal is mastery of traditional math.  Just because a child can move cubes around on the table to a prescribed formula does not mean he can do addition or subtraction when encountered on the printed page.

Case in point: EVERY time I tried to teach borrowing with manipulatives, the same thing happened.  First I would show the child stacks of “10” bars and “1” cubes, representing the minuend of the subtraction problem.  Then I would show how we would need to exchange a “10” bar for 10 cubes and combine them with the cubes already there — then we could do the subtraction.  And every time, they were able to show me the procedure with the bars and cubes, exactly as it should be done.  The next step, then, was to look at a subtraction problem on paper and use a pencil to complete the problem. But for some reason, the only way they could complete the problem on paper was by memorizing the procedure of crossing out the number in the tens column, writing one less, and adding 10 to the one’s column.  They did not understand WHY they were doing it, just that the only way to get the correct answer was to do it that way.  They could not translate what they saw with the bars and cubes to what they needed to do with with the written numbers.  If manipulatives were truly making a difference and giving them that “aha moment,” wouldn’t they remember the meaning behind what they’d done? Wouldn’t they be able to reproduce it for themselves on paper, explaining it as they went? I think they were just too young to make that kind of relationship happen in their brains.

A better use of the child’s time than working with manipulatives ad infinitum would be to memorize addition and multiplication facts, measurements, etc.  During the elementary years, this is what the brain is best suited to do.  As the child masters those, then processes such as borrowing and long division can also be memorized — even without understanding what they mean abstractly.  Frankly, it’s often easier to memorize a procedure when you are NOT trying to understand the why.

And after those facts/procedures are memorized, an amazing thing happens.  After the child has become so comfortable with all the facts and the procedures that he could do them in his sleep, then, when his brain is ready, that is when the understanding begins to kick in. “Oh, THIS is why we do it that way! I get that now!”

(This is actually the basis of the classical model of teaching. The first stage of classical education is called the grammar stage, where children learn lots of facts about just about everything – it is not until the dialectic stage, in the middle school years, that the child begins using those facts to understand the world around them. I think this model is particularly applicable to the study of mathematics.)

Another claim of manipulative users is that manipulatives “build student confidence.”¹ I think a child will gain more confidence in math from doing the work of memorizing, rather than messing about with manipulatives. It is not until those building blocks are cemented in the brain that higher learning can take place. Math builds on itself.  You must know your addition facts to learn mulitplication; you must know your multiplication facts to learn division. To neglect the fact-building in favor of using manipulatives is to sow the seeds for LACK of confidence and LACK of understanding, in my humble opinion.

And who says memorizing can’t be fun?  At that age, kids LOVE to memorize things, and sing jingles, and time themselves.  A lack of manipulatives need not equate to boring and dry math instruction.

Of course there is room for some use of visual aids – but it is not necessary to spend a fortune on manipulatives. Dried beans can be used for counters. Glue the beans on a popsicle stick to make a bar of 10. Graph paper cut into squares can be used to illustrate all sorts of relationships.  But don’t expect the child to understand the concepts or be able to explain them.  That will come later on, when his brain is able to put two and two together and come up with with a sentence.

Yes, math can be a difficult subject for many kids.  But I do not believe manipulatives are the answer to that.  Let’s get back to the basics and stop expecting the unrealistic and unnecessary.

Do you agree or disagree? I don’t mind opposing views, as long as they are expressed politely. Feel free to add your two cents in the comments, or come to my Facebook page and let me know what you think!

I asked a question in my It’s Not that Hard to Homeschool K-8 Facebook group recently: “Do you feel like a success as a homeschool mom?…

Overview: This article tells how to teach independent learning to your kids of almost any age and gives ideas and strategies for this very important…

Overview: You don’t want your kid to hate math for the rest of their life. Here’s what to do about it. It may be a…

22 thoughts on “Why NOT to use Math Manipulatives”