This year was our 16th year of homeschooling. Phew! And that’s not counting whatever preschool we did before the eldest entered kindergarten. I’d be pretty impressed with myself (lol) were it not for the fact that this past year proves that I still have plenty to learn. It turns out that just when you think you’ve got it all figured out, you might have to wake up, smell the coffee, and realize that you’re in a rut. I know I did! 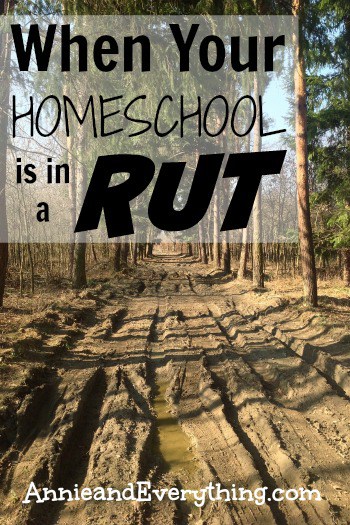 To be “in a rut” means to be “in a settled or established habit or course of action, especially a boring one” (as per Dictionary.com).  Can you say, “ouch”? But as I look back over this year, I think that’s exactly where we were.

How do I know? Well, maybe it was the kids’ attitudes that gave me my first clue. “I hate math.” “Can we take a day off from school today?” “Can I have a (insert long unit of time here) recess after lunch?”  I heard these OFTEN. My kids know better than to blurt out the “I wish I went to public school” dagger, but “I’m bored” will suffice for an equivalent – and that was a frequent complaint this year.

Their actions were another giveaway. Schoolwork not finished on schedule, school days stretched from breakfast to bedtime, Saturday homework a most-weeks occurrence… motivation has been lacking for much of this year. And here we are, halfway through the summer, still finishing up some subjects…

And hey, the kids were not the only ones. I was perpetually behind on grading (still haven’t wrapped it up for the year); and lesson plans only happened because if I didn’t make them the kids would wander around aimlessly, even though they’re old enough to figure out what comes next and do it. Everything was the same ‘ol, same ‘ol this year. This year we have all been feeling unmotivated, bored, lonely, slogging through the daily tasks without much excitement. Sigh.

It’s true that our homeschool model hasn’t changed in a LONG time. My eldest blazed the path for homeschooling high school, and the rest have followed in her footsteps, mostly. I picked out curriculum for her, and the rest have used it, too. And I still feel that what we have been doing is a very viable style of homeschooling. So if it ain’t broke, don’t fix it, right?

I guess it depends on what your definition of “broke” is. What worked best in one season of homeschooling (i.e., when we had five students in our homeschool) may not be what’s best in another season. Just as I described in my post about Our Homeschool Journey, times and needs change. And that’s OK.

Next year we will definitely be in a new season, with only two students left schooling at home (we’re sending THREE off to college in the fall.  That’s another kind of “ouch”, lol). And based on how this year went, it appears that it’s time for a change. That doesn’t mean what has gone before was wrong or bad. One of my mottoes is that there is no one right way to do this homeschooling thing. So change is not a bad thing nor a judge of previous endeavors! It would be foolish to stay stuck in a “settled or established habit or course of action, especially a boring one,” in the name of “it was good enough before, so it’ll be good enough now.”  Each student is different, and each season may require a different homeschooling method.

In our case, when the house was full of kids, loneliness was not a problem.  I think this past year, though, with only three students at home, feeling lonely might have been a huge contributing factor to our less-than-stellar motivation.  For the kids AND me.  Go figure.

So this fall we’re getting out of this rut. We’re making a big change! I wrote last week about our decision to switch to the Classical Conversations curriculum and join the local group. I have high hopes that this will jump-start our motivation and give us all a renewed drive for learning and being diligent. In CC we’ll have more support, more interaction, and more diversity from day-to-day than we have in the recent past. And I think with just two kids and I left in our little academy, we’ll need all of those.

No, this is not a surrender to the “socialization” concerns that the uninformed have about homeschooling. But I don’t need to be stuck in my house every live-long day just to prove a point. Homeschoolers still like to be social, y’all. My family just doesn’t want to do it in a canned, government-controlled environment where kids are forced to spend LOTS of time with bad influences and are faced with nasty temptations each and every day.

What I love about it is that we will still be homeschooling. Because you know me, I’m all about homeschooling through high school and wishing more people did just that. Just because our homeschool isn’t working the way we hoped doesn’t mean it’s time to jump ship altogether.  It may just be time to try a new path.

Can I say it again? THERE IS NO ONE RIGHT WAY TO HOMESCHOOL. Every family determines what works best for its needs and circumstances. And as those needs and circumstances change from season to season, the method of homeschooling can change – sometimes drastically, sometimes more subtly. I learned that again this year. I think a lot of veteran homeschoolers will admit to learning and relearning it along the way, too.

It’s always good to reflect back on the year and see what worked and what didn’t. I even recommend it in my post about things the homeschool mom should try to accomplish over summer break. Plan on making changes this fall, big or small, to overcome some of the difficulties of last year.  I think doing so every year is a great way to keep our homeschools doing what we want them to do – which is always to provide a safe place for excited, individual-based learning to take place.

What did you learn from your homeschool this year?

This article is part of a linkup — a bunch of articles with the same theme — with the iHomeschool Network.  Click on the picture below to see what other homeschool moms have been learning! :-) 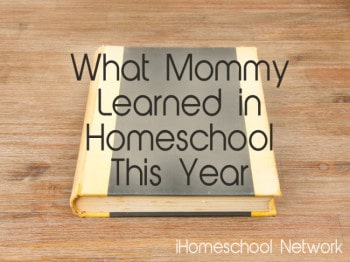 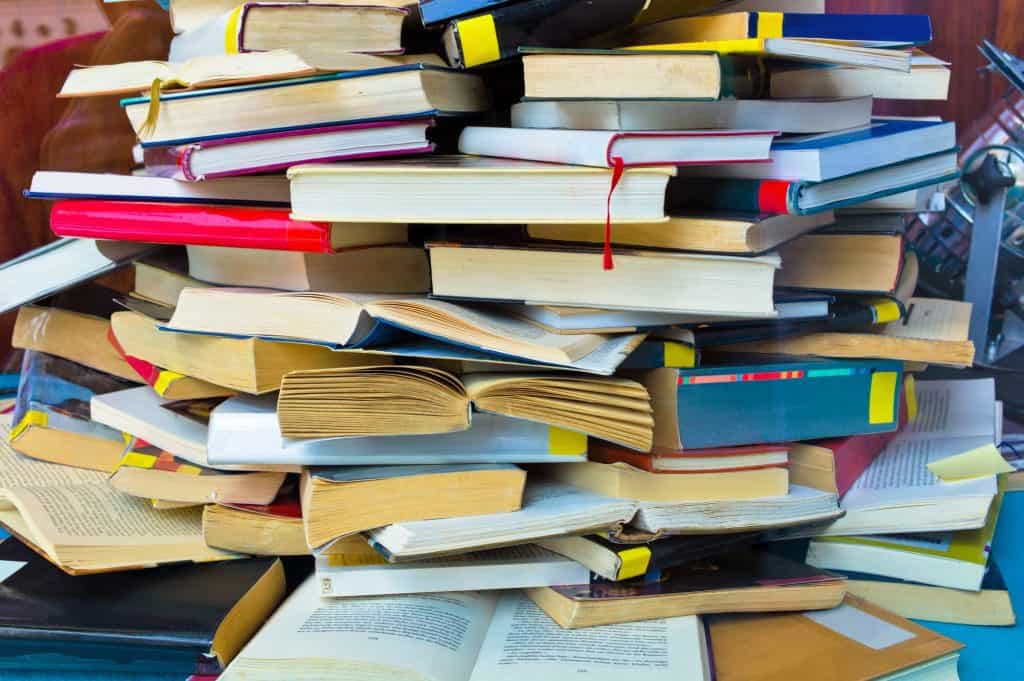 When you’re a newbie and you start looking at curriculum and there is SO. MUCH. OUT THERE. And you wonder how you will ever get… 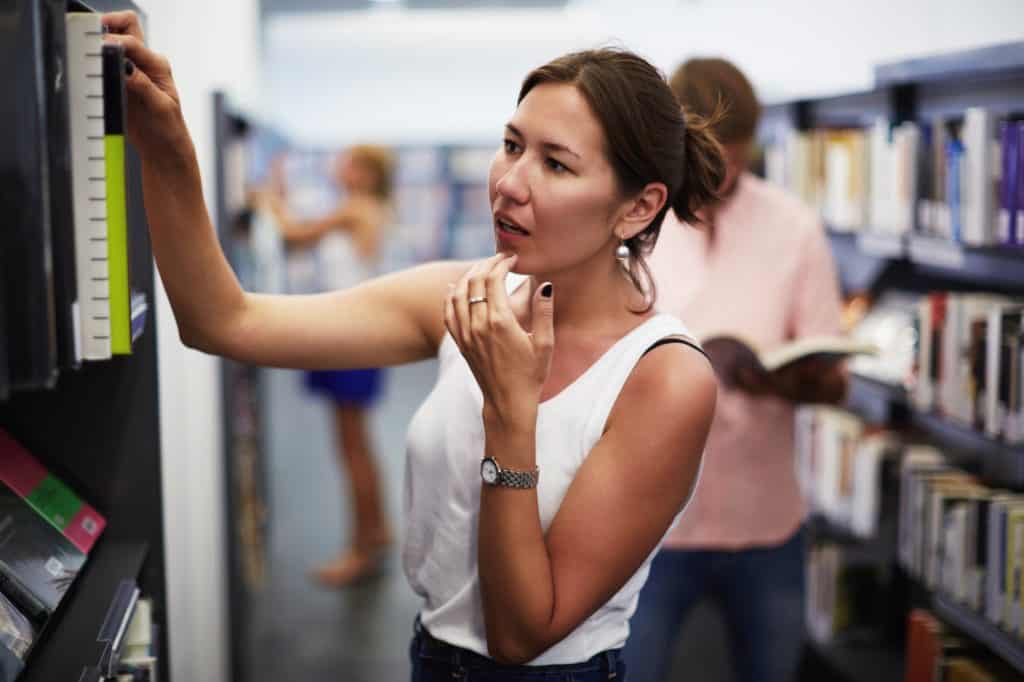 It’s that time of year when we are narrowing down our curriculum choices, when the hope is high that we’ll find something that will really…