When money is tight, sometimes we have to take radical measures.  Sometimes the usual cost-cutting techniques are not enough.

The Man and I have dealt with money shortages several times during our marriage — no comment as to whether or not we are in one now, lol — and early on we developed a system for temporarily suspending the usual budget until we can get back on our feet again.  Instead, we set up a sort of emergency budget that we call the “lean burn budget.” 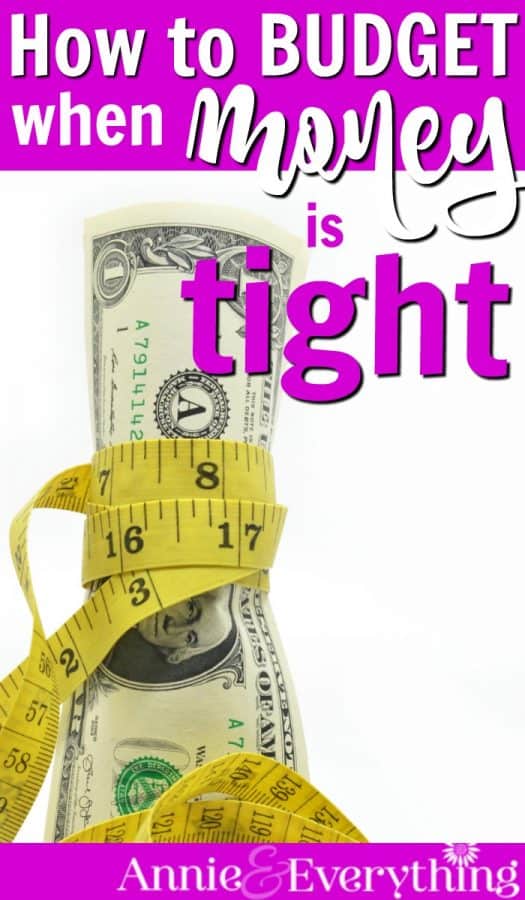 The idea of “lean burn” originates from auto mechanics — an engine is burning lean when it is using as little fuel as possible but still producing power. The engine is also burning the fuel more efficiently, so that there are fewer by-products in the exhaust.

A “lean burn budget,” then, is one that uses as little money as possible while still meeting the basic needs of the family.  And that money is used very efficiently, with minimal waste.

It is similar to a no spend month, except that it may last for longer than a month, and it is even more drastic when it comes to deciding what to spend money on.

When money is tight, try a lean burn budget:

The grocery allocation gets reduced to only enough to sustain life, lol. There are no goodies like soda or chips or cookies or ice cream.  Just the basics — the CHEAP basics.

2) The gasoline budget includes only enough to get to work,

and the usual behavior becomes staying home, rather than going to even the regular, scheduled events.

3) The optional spending categories of the budget get dropped altogether.

No eating out.  No haircuts.  No music lessons.  No movies.  Tithing?  That may need to be cut, too — but since that is such a personal decision, based on individual conviction, I will just present it here for consideration without declaring a definite opinion about it.

4) This is where it gets even more intense: the Christmas fund, and any other optional savings funds, get suspended.

That means no more deposits into them.  Christmas is not a basic need, y’all.  Neither is new clothing all the time (in reality, you probably have plenty of it for now), or even the homeschool curriculum fund.  All of these things can be done without for a period of time while money is tight, or it is possible to find free alternatives.

5) And this step can be scary, but desperate times call for desperate measures: the bills that do not come around every month might not get funded either.

Or they may get only partially funded.  When it’s a choice between the car insurance that is due in 4 months and the electric bill that is due this month, it’s a no-brainer.

Of course, this depends on just how lean you need to be — i.e, how much money you still have coming in.  This is one of the reasons why we cut the food and gasoline so intensely, so that hopefully there will be enough left over to still save for the non-monthly bills.  But sometimes there isn’t.

6) The last resort is to stop paying the credit card payments.

I know, some people would probably say to fund the car insurance (which only comes due every six months) BEFORE the monthly credit card payments, but I’ve never done that.  I’m always fairly optimistic and thinking we can sell something or somehow come up with the money for the car insurance by the time it’s due — we’ve even been known to take one car completely OFF the policy and not drive it for six months — but those credit card companies get nasty in a hurry when you start missing payments, and I don’t want to experience that.

On the other hand, when you do miss a payment or two, that’s when they claim they will help you with credit card forbearance.  I guess I’m just a scaredy-cat when it comes to the late fees and the negative credit reports… wouldn’t be prudent, not gonna do it if I can help it.  But I present it here as a possible part of the lean burn budget, if things get bad enough.

So you can see that there are varying levels of lean burn-ness.  But the main point is to make what little money we do have meet the most NEEDS that it can.

You know how when you’re extremely low on gas, you turn the air conditioning off until you can get to the gas station?  Because running the air uses more gas, right?  And you’re more willing to put up with a little heat than to run out of gas altogether and have to sit by the side of the road or hike who knows how far to the gas station.

Same principle here.  When money is tight, we drastically cut out the non-necessities, putting up with some inconvenience, so that we can get more mileage out of the money we do have.  It is a means of scraping by for as long as possible, holding out for a hopefully foreseeable time when the income will increase or an expense will decrease (like when a debt is paid off).  On a lean burn budget, money that might normally get spent in one month can be made to stretch for two or three months or more.

Sometimes we use the lean burn budget idea to help us with decision-making.  Like, “This is the only job you’ve been offered, but is it really feasible?” “Well, we can meet the lean burn budget with it but not much more.”  This may or may not have been a recent conversation in our house.

I don’t like it when the money is tight — who does?  But it becomes less worrisome when we have a plan for making it stretch as far as possible.  The lean burn budget does that for us.  Now, if you’ll excuse me, I’ve got some beans to soak. 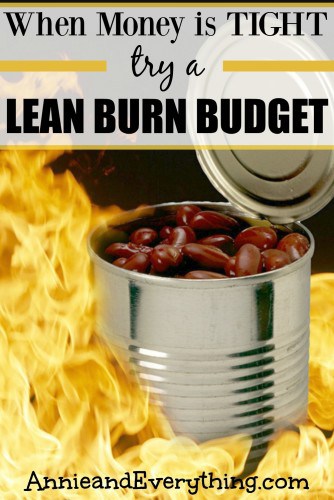 12 thoughts on “How to Budget When Money is Tight”