Overview: Are you wondering if your boy’s maturity level will affect his academics in high school? Read what I’ve learned from homeschooling my son over the years.

And I have come to the conclusion that they’re right.

It has taken me years to fully realize it, though. So this post is a warning, or at least a recounting of a lesson learned the hard way, for anyone who thinks they know better than conventional wisdom, like I thought I did. Even if you don’t see it now, you might want to consider carefully how you deal with your boy’s academic career, especially when he has a summer or early fall birthday. 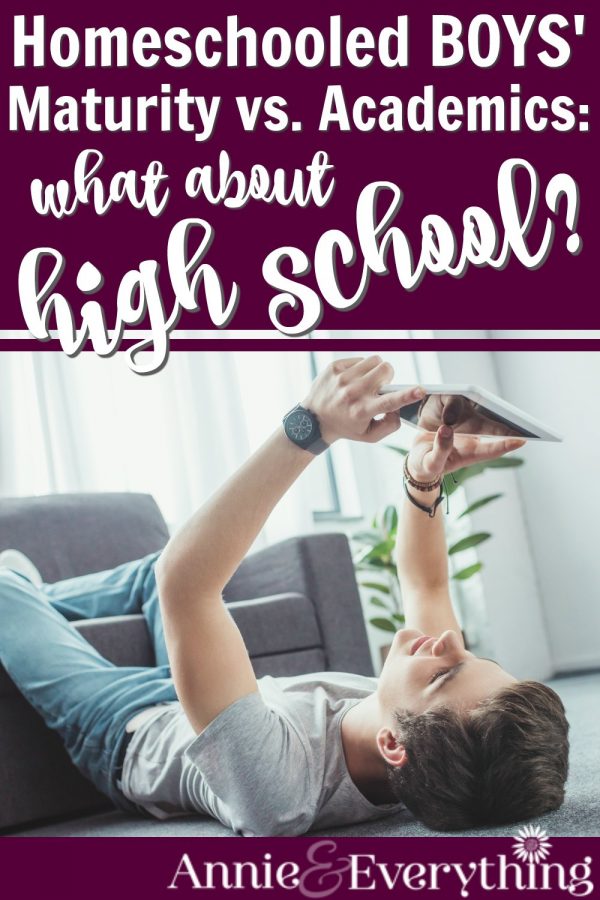 It all began back in 1999. We had literally just moved to California for my husband to attend seminary there. We had three young daughters, and then I became pregnant again. And I have to be honest and say that after three girls, I was seriously excited to find out we were having a boy. The fact that his due date was in late September didn’t faze me a bit, except to cause me to wonder if he’d end up sharing a birthday with his next older sister, who had also been born that month.

Well, he didn’t; he waited until almost the last day of that month to arrive, and of course I loved everything about having a boy. But BOY, was he active, and loud, and through the toddler years he certainly proved that he had a will of his own…

He was bright, though, and partly to give him something to occupy his mind (other than destruction and loud noises and having his toes painted by his older sisters) and partly to work on the habit of self-control, I began teaching him to read at about four years old. We took our time, but he caught on quite well.

With three older sisters already doing school and then a younger sister also in the mix, it seemed to make sense to start him with kindergarten work the autumn he turned five. For the preservation of my sanity, I needed his day to become more structured. I had talked to people about how it might be best for a boy to wait another year before starting school, but I knew my son was capable of handling the academics; and having never had a boy before, I didn’t fully understand the maturity issue. I had my hands full with five young children and a husband still going to school/working full-time, and I craved what little order I could get. So he joined in for part of the school day with his sisters.

As the years went by, he did fine with the academic work. Sure, he had trouble focusing on anything for very long at a time, and so getting his work done was a bit of a chore — but not because he didn’t understand it. I used to joke about how it was good that he wasn’t in public school, because he would drive his teacher crazy.  Um, he drove me crazy, but I figured it had more to do with who he was (as an individual) than the fact that he was a boy. Somehow I forgot that the fact that he was a boy had a great deal to do with who he was…

Fast forward many years. Academically, my son has done fine. He really does understand most of what he’s doing, and his grades reflect that. Maturity-wise, though, he is not on par with other soon-to-be high school juniors. This shows itself in many ways:

1) His younger sister is the bane of his existence. He is really bothered by her almost every minute of the day. Of course many times she is being obnoxious – but his reaction is much more than the situation warrants.

2) He still has trouble focusing on his schoolwork. He needs fairly constant supervision or he will drop off-task and stay there for hours. He does get decent grades – when he finishes his work…

3) He gets frustrated easily when he doesn’t understand something right away. This can lead to rather severe meltdowns – and I thought girls were emotional! Phew! 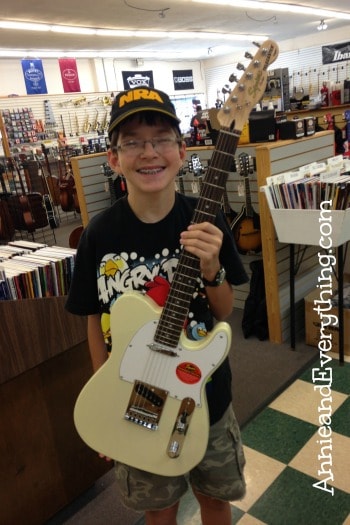 4) His interests are still entertainment-based rather than productivity-based or future-career-based. We have no glimmer of a plan yet for what he should pursue after high school, because his goals are still in the (let’s just admit it, y’all) unrealistic range of designing the next big computer game or becoming the next major rock star. (Not that those are not great careers, and obviously people do them – but in reality, they probably won’t happen to the majority of people that pursue them.  Of course we want our children to dream, but there comes a time when practicality also becomes a factor… at least in my world.)

I don’t see any of these things as his fault, necessarily. They are just part and parcel of growing up. If anything, they are my fault, for not having the foresight to see what was coming down the pike. For not listening when they told me about boys’ maturity levels vs. girls’. For thinking my son was different than centuries of boys. It was pride, really – and it did a disservice to my son.

And it hit me not long ago that many of these things wouldn’t be as out of place in a high school sophomore as they are in a junior. I realized that the ability to understand the academic material is not the only indicator of where someone should be in school. Maturity level plays a large role in success.

I wonder now what it would have been like if we had started him a year later or held him back a year while he was still in elementary school. And I do think it would have been better for him. But because of his ability to get good grades academically, we didn’t see the need at the time when it would have been best. And now it’s too late. (I don’t know about you, but I don’t think a five-year high school transcript looks too great…)(UPDATE: I’ve since learned that people do this. So it might have been a possibility, after all…)

Further, I think he would be doing even better academically, had he the maturity level to go along with the subject matter he is learning. Chemistry is pretty heavy stuff, after all. Just because you can make the equations work doesn’t mean you wouldn’t understand all the reasons behind them much better if you had the maturity to process them. And the work ethic that comes with that maturity.

But all is not lost. We are looking into Classical Conversations for next year, where he would gain some academic accountability and also perhaps some social maturity. We have also about 99% decided that he will take a gap year between high school and college. I am confident that in time, he will grow into a responsible, hard-working young man. And in the meantime, he’s pretty stinkin’ cute and has eyelashes that a girl would kill for. :-) 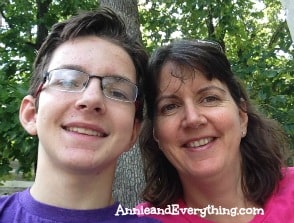 So guess what?  They in the “they building” are right when they say that most boys mature more slowly than most girls. I know that now; my son taught me.  But I must confess in all honesty that I won’t mind having him with me a little longer than his sisters.  There is something about raising a boy, who then grows taller and stronger than you, yet still puts his arm around your shoulders… I just melt…

What’s your experience with boys and grade level?  I’d love to hear from those of you that have more than one!

P.S. This post has been written with full support and permission of my son. Which shows maturity on his part, in my opinion. :-)

I’m linking up with my fellow members of the iHomeschool Network today, as we all discuss “What My Child has Taught Me.”  Click on the picture below to see a host of articles just rife with good lessons! 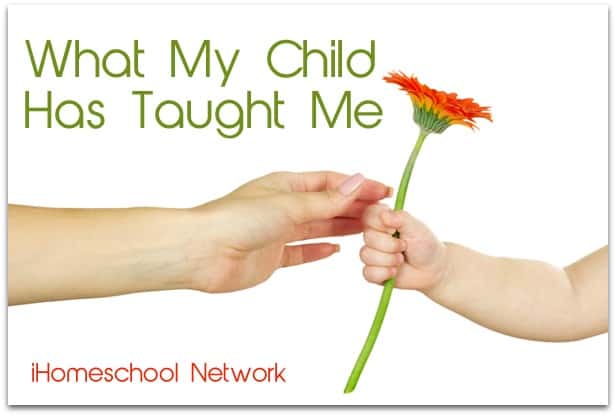 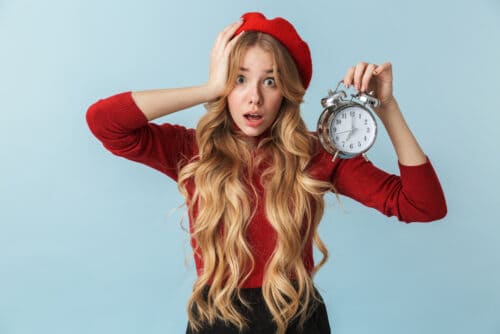 Overview: Guest Contributor Lynna Sutherland shares strategies to help a teen with time blindness, so they can be more productive and confident as they homeschool.… 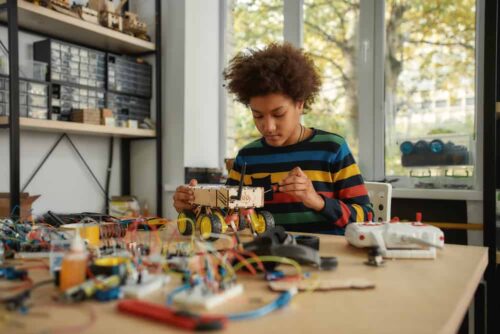 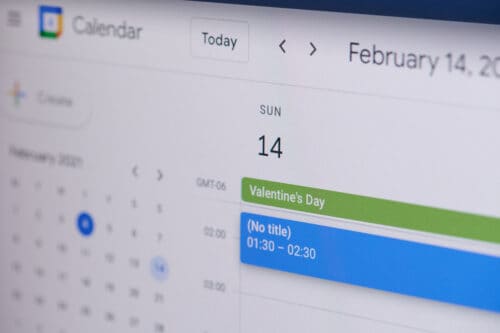 Overview: Guest contributor Lynna Sutherland is a veteran large-family mom who is amazing at keeping things organized and stress-free. Here she shares step-by-step instructions for…

51 thoughts on “Homeschooled Boys’ Maturity vs. Academics — what about high school?”